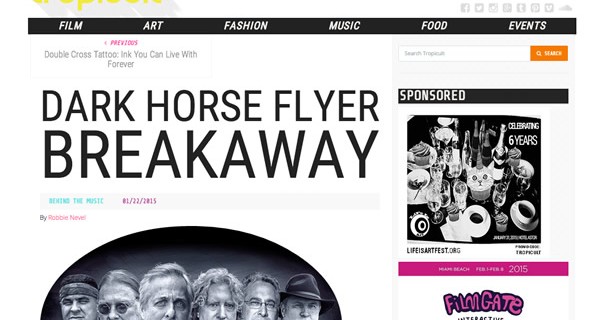 Thank you Tropicult.com for the very nice review of Breakaway (which is now available as an audiophile double LP!):

Their music is a wild, bluesy rock and roll party informed by the likes of Tom Petty and the Heartbreakers, The Allman Brothers Band, and all time three-guitar champions Lynyrd Skynyrd. Occasionally, the crazy times take a back seat to jazzy introspections more in the vein of songwriting masters Steely Dan.

The band’s musical mastery is not shy to show itself; the album starts with blistering instrumental riff rocker “Hurricane,” featuring guitar solos worthy of Woodstock. Showing off their fluidity, the very next track “Seasons Four” is full of an acoustic jazzy feel that suits the expertly crafted ballad. Later in the album, “You’ve Got a Hold On Me” brings in a rhythmic vibe worthy of Santana.

The retro feel of the album, mastered by studio heavyweight Bernie Grundman (Steely Dan, Michael Jackson), is very much intermingled with a feeling of new discovery and influence not present as of yet in blues-infused classic rock.”